This website uses cookies to enable important site functionality and analytics. Learn more
Home / Film making and Film Education / Frames and rules
In the beginningFrames and rulesWatching and makingThoughts on practice

Cinema practice needs time to be a real experience: so giving a ‘frame’ is a way to create an interesting dynamic. It helps students not to be lost in stereotypes of mainstream films, as it proposes an unexpected way to approach cinema, with a rigorous methodology.

This rigour is more necessary than ever (…) as it has come under threat from the over-reliance on ‘gadgetry’, and poor or wasteful practices, allowing people to play at making films, with no real sense of rigour. With today’s digital cameras we can easily film anything in any way we please. Just because a film is made using such equipment, with such immediacy, doesn’t mean that the young people who may make such a film will have had a true experience of the power of cinema. (Alain Bergala).

Focusing on a parameter helps children discover that film is not only based on narrative and dialogue, and opens them up to the richness of cinematic expression. It helps us discover that the cinematographic material (sound, light, rhythm) produces meaning and emotion. This is always a surprise for students focused on storytelling and dialogue, and it offers a ‘scarlet thread’ to approach film-making in a deeper way.

Choosing a set of parameters from cinema also gives you a key to watch film, directing attention (especially for films far from young people’s own film diet). We become active spectators if we are searching for something precise.

Previous topics for investigation in the CCAJ workshops have included: Colour, Point of view; Hidden/shown, Camera movement, Places and stories, and Climate.

After viewing films in cinemas and having analysed pre-prepared clips on the topic the participants perform individual filmmaking exercises. Working through individual and little group based exercises defined by the rules that govern the project allows participants to experiment and develop an understanding of the interplay of elements that make up this question of cinema.

The question of ‘hiding and showing’ in cinema is essential because it speaks to all the stages of filmmaking: the creation of the scenario, with its jumps through time; the choice of setting; how the film is edited (what is left out); the use of sound and light to show or hide; and it also concerns the actors’ craft – how to show or hide the characters’ emotions, to hold or show their interior life. 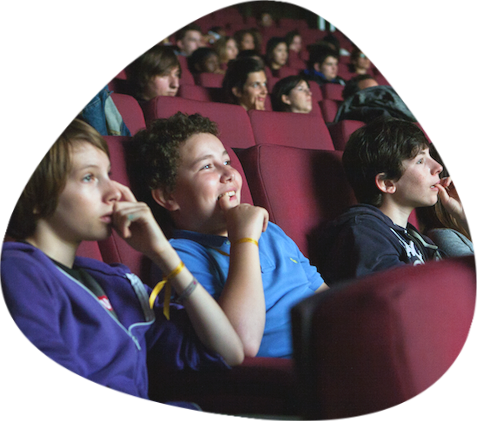 Enigmas, ellipses, secrets, mysteries and revelations: how - and why - are ‘shown and hidden’ central concepts in cinema?

The following short selection of exercises were realized by all ages of students on “hidden/shown”.
These exercises were linked to a set of simple but effective ‘rules of the game’:
(NB, the clip features indistinct dialogue which we haven’t subtitled as it is not the focus)

Rules of the game

Watch each of the 10 shorts by clicking through the thumbnails. See if you can recognise which of the ‘rules of the game’ the students have used.

Could you spot techniques and references students have used from other films? Could you suggest other film clips or rules of the game for exercises on this subject?

If you want to get some film clips examples about hidden/shown see here.